The only difference, in that case, is that the Bowden style configuration comes with a longer PTFE tube. For this reason, comparing these two 3D printer configurations is not exactly straightforward.

One way to summarize this comparison is that Bowden configurations can print a little bit faster but Direct Drive style 3D printers give you more consistent results and can use a variety of materials, too.

Read on to learn more about the differences of a direct drive vs Bowden extruder. 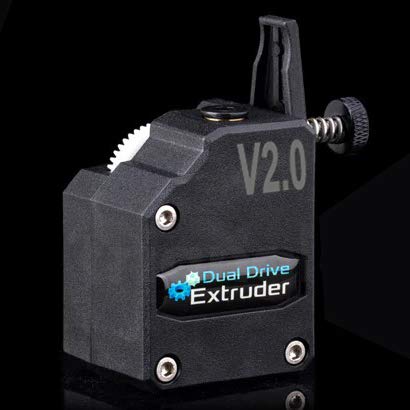 When looking at these configurations, the most important terms to understand are PTFE tubing, extruder as well as extruder assembly, and hot end, in addition to hot end assembly.

Extruder assembly is made up of an idler that is mounted to the 3D printer’s frame or gantry, a drive gear or hobbed bolt, and finally a stepper motor. However, the extruder itself includes the idler, gear, and motor.

The assembly includes all the other parts of the extruder. The hot end assembly mostly consists of a heatsink, heat block, and nozzle. All of these are mounted onto a 3D printer’s gantry. A cartridge heater, specifically one that is a resistive type, heats up the nozzle assembly as well as the heat block.

Since there is a hot end, there is also a cold end of the printer, as you might expect. The rest of the hot end assembly as well as the heatsink are called the cold end.

This does not mean that that part of the 3D printer is actually cold. It really just means that the heatsink separates the 3D printer’s heat block from the rest of the printer’s parts. Additionally, the ‘cold end’ also cools the assembly down by radiating heat away from it. It is easy to just use the term ‘hot end’ for the hot end assembly.

The extruder, such as the Bowden extruder, consists of the idler, gear, and motor. The extruder assembly includes the rest of the parts that make up the extruder system.

What Is PTFE Tubing? 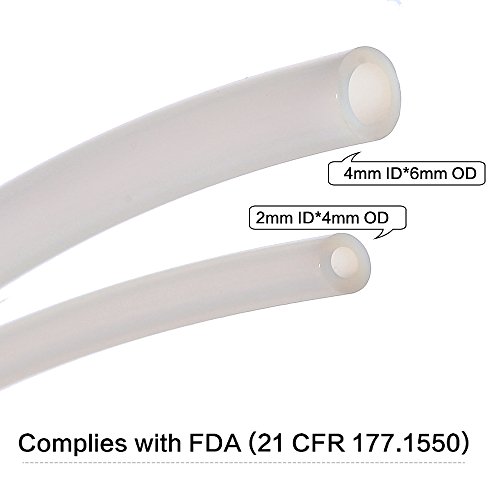 You can connect this tubing to either a direct drive or a Bowden extruder system. Typically, either fittings or push-fit connectors connect it to the assembly. This helps make sure that there is a seamless transition from the extruder itself to the hot end of the assembly.

A 3D printer contains many important parts, but you can argue that the most important part of it is its extrusion system. Fused deposition modeling is a popular type of 3D printing technology. The two main reasons for its popularity are that it is quite affordable and easy to use, as well.

You certainly don’t have to be a 3D printing expert to use an FDM 3D printer. The extrusion process starts at the extruder assembly on FDM printers. The 3D printer grabs the filament between the idler and the hobbed bolt and pulls it into its system.

Bowden configuration 3D printers can work well for printing products for a business since you can print them out more quickly.

In contrast, Direct Drive configuration 3D printers print flexible materials like TPU quite well. This means that both beginners and experienced people can print out TPU, which is both durable and flexible.

What Are Some Strengths of the Bowden Configuration?

As a result, the Bowden system offloads the extruder’s mass onto your 3D printer’s fixed frame. This is something you should keep in mind since constant deceleration and constant acceleration can lead to gantry backlash.

These negative effects only get worse when you put more mass into the 3D printer. All of this movement makes the hot end lurch backward and forward.

Since the hot end lurches back and forth, the printed part often ends up with imperfections. If the 3D printer moves with a smaller amount of mass on its gantry, it means there is a smaller chance of these vibrations happening.

What Are Some Drawbacks to the Bowden Configuration?

ABS and PLA are two types of materials that usually do well with particular Bowden configurations. You can learn more about ABS here.

ABS is the acronym for acrylonitrile butadiene styrene. It is a type of plastic and the 3D printer guides it into an extruder that then heats up the ABS plastic enough that it melts and liquifies. In any case, Bowden configuration 3D printers have to meet certain conditions to print flexible materials well. These conditions are:

What Are Some Strengths of the Direct Drive Configuration?

One major advantage of direct configurations is that they are quite responsive. This is because there is less distance between the hot end and the extruder. As a result, both retraction and extrusion commands go through more quickly.

What Are Some Drawbacks of the Direct Drive Configuration?

Direct Drive configurations print more slowly than Bowden configuration 3D printers. You should know that the other hardware in the printer can limit printing speeds.

Even if the extruder of the Direct Drive moves at a certain speed, the hot end may only be able to heat then discharge a specific amount of material at that time. In that instance, the hot end is what limits the 3D printer’s printing speed, not the configuration.

Which Configuration Should You Choose?

The three most critical factors to take into account when you choose an extrusion system are the resolution, the correlation between resolution and time, and also the diversity of materials.

If you value printing speed above all else, the Bowden configuration might be best for you. If you value the 3D printer’s ability to print flexible materials, the Direct Drive configuration could be a better choice for you. It depends on your specific needs.